It has rained heavily all night and we are very happy to see sun in the morning. After a copious breakfast we set out to meet with our guide Rahzalee (or Li). He is a very friendly local guy whose father was also a ranger in the park. Li takes us on the Mount Tresek and during the hike stops to explain interesting facts about the flora.

There are two types of trees in the rain forest: soft and hardwood trees. The softwood trees loose all their leaves a few times during the year but the trees don’t stay bald very long , in too, three weeks their “winter” is over! Hardwood trees on the other hand stay evergreen.

Li cuts us some wild ginger and has us eat the soft core. It’s supposed to help fend colds. Skye who has a sore throat since yesterday should benefit from this! 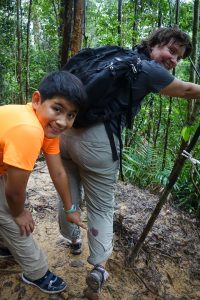 The first fauna we see is not all too nice: it’s leeches! Sandra has one that climbed all the way up to her neck, she manages to grab it in time before it latches. Hew, gross! Further on a sweaty and muddy climb (we have left the boardwalk for a stretch), Skye wonders why Sandra has a big stain of blood on her pants. It appears another leech was more successful at attacking her without being noticed.

We reach the top of the climb and are greeted by monkeys, it’s very cloudy so there is not much of a view. We try another viewpoint, and despite the clouds, it gives a better idea of the expanse of jungle lying ahead. The Taman Negara is the first Malaysian National park and it is a large protected piece of land. It’s reassuring to see this treasure. Orang Asli tribes still live a primitive life in the deep jungle and run away if some campers cross their path. There are also a few tigers and presumably Asian rhinos lurking in the park.

On our way down we see the canopy walk which we won’t be able to do today as it’s to slippery after the rain. Also our afternoon activity was supposed to be navigating in a small boat to go to a fall were we could bathe. But with the rains, the water is too high. We don’t mind, as we will be doing a trek to a waterfall in Tioman and the replacement activity, visiting a semi-settled Orang Asli tribe is interesting.

So after lunch we embark on a motorboat on the main river and get copiously splashed in the buoyant rapids before reaching a small settlement on the river bank. 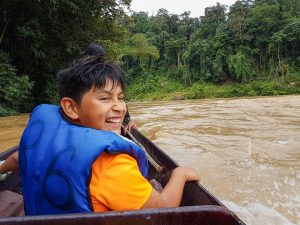 The little huts are simple palm leafed roofs, but civilization has touched them, so they have bought some tarpaulins to double their roofs, those are less glamorous but certainly more leakproof.

Li starts to explain how they build blow darts with bamboo. A local villager proceeds to build a dart out of hard wood and balsa wood stuck together with a fire heated natural glue. Everything is done with material available from the nature and fire made the old ways, by rubbing a shaft of wood on a plank. In the morning, Li had showed us the tree that gives the poison the tribesmen use to coat their darts. The sap has to be collected in the morning when it rises from the roots to the leaves. It is lethal for monkeys and other small animals, humans would not die from one blow, and eating dirt is supposed to be the counter poison. Since wild pigs are constantly foraging the dirt, apparently they are immune and can’t be chased with that method. We get to try our aiming technique with a blow dart on a teddy bear. All of us are successful at skewering the poor thing. 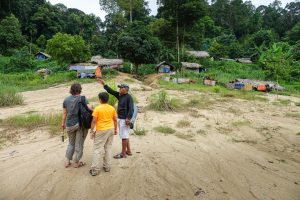 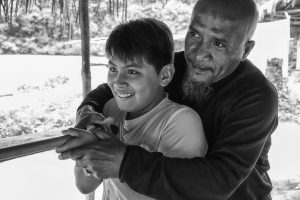 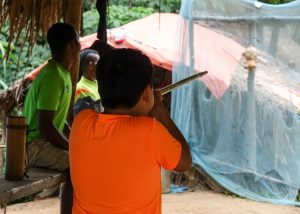 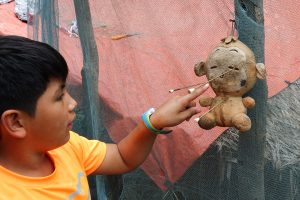 The tribe is a mix of African type people with black curly hairs, and Aborigines type people with straight hairs. The children are numerous, and not at school. Li explains that the government tried to lure the kids to school with breakfast and lunch and dedicated class for them, but the kids were too unruly and preferred to drop school than follow rules.

These folks are keen on their freedom, but they don’t spit on modern amenities, such as stores were they can buy modern food. They no longer eat bush meat and are far more interested by a ready-made chicken dinner. 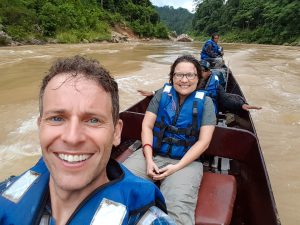 We head back to our resort to change in dry closes yet again for the apéro. On our way to our hut, we decide to check the swamp walk and a hide overlooking a clearing with salt leaks to attract animals. It’s a very beautiful spot and we see a few interesting birds. On our way back we also spot wild boars just outside our hut. After dinner, since the weather is more auspicious, we get to do the night jungle walk with Li and his next group, two couples of young swiss Germans.

We see big spiders, a thin long snake, scorpions, snails, moths and enjoy walking in the mysterious jungle with all its noises in the darkness. At the hide, our guide explains that one guest once spent seven hours in the hide and a tiger came in the clearing, he managed to take a picture before being spotted by the cat, who promptly crept back into the jungle. 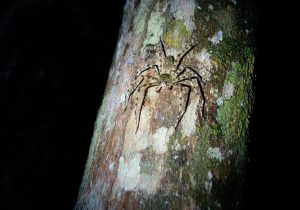